The desert hiking season has begun. I considered a hike in the Grand Canyon but decided I wasn't quite in shape for it yet. Instead I selected the Wilson Canyon Trail just north of Sedona. It's right on the edge of the desert and features a combination of red rock, desert vegetation, and a few ponderosa pine trees. I've been hiking every winter in the Sedona area since I moved to Arizona in 2015, but for some reason I never did any hiking in Oak Creek Canyon. Always before I hiked in Sedona or to the south or west of town. Wilson Canyon is one of the side tributary canyons of Oak Creek.

Part of the problem is parking. The trailheads have limited parking. This is somewhat due to the terrain being unfavorable for roads, parking lots, or buildings for that matter. It's a steep sided canyon. As a result, to hike there on a weekend, you really have to get a very early start or you will find yourself unable to park at all. I left the house at about 5:50 am, running behind scheduled because I realized at the last minute that I hadn't fed the cats.

The hike starts off on what is obviously an old road, but eventually turns to single track. Due to a couple of (currently dry) waterfalls, you don't have to descend into the watershed, despite the depth of the canyon where the bridge crosses. You just walk up into the drainage. The trail follows the dry stream bed and crosses several times. There were still some puddles from rain last week, but there was no flowing water.

I didn't see a soul after the first quarter mile or so, including one backpacker hiking out after a night. There are a couple of trail intersections, so it's hard to say which way he'd come from. I always get a little nervous hiking alone near the start or end of a day, that's when the large predators come out. I saw very fresh droppings, but analyzed them to likely be from javelina rather than a predator. I still kept my head on a swivel though. The brush was quite dense in the canyon. I heard some animals moving around but nothing I estimate to be large.

The trail ended with a sign, but I could see a smooth dome of red rock above and to the right and suspected it would be a good place to view the scenery. The stream bed was smooth and beckoned, so I proceeded a few feet beyond it and was rewarded to see a steep "goat path" up onto the dome. The views from the top were breathtaking! 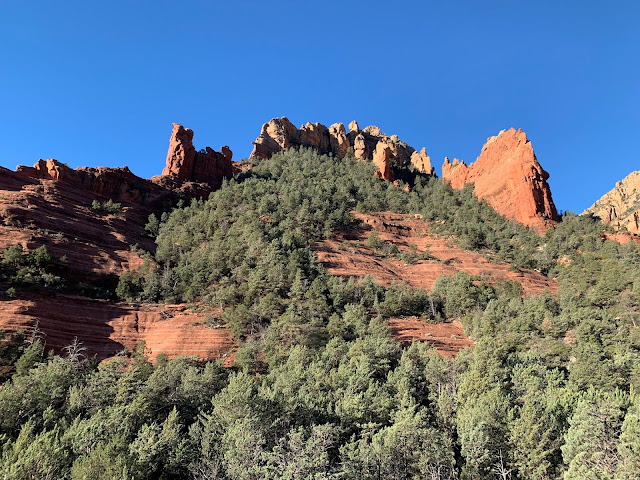 Unfortunately I don't know how to use a camera properly so most of my photos weren't as good as I thought they would be, but the experience is better than the photos anyway. I hung out for several minutes just taking it in.

The return hike was fast, being downhill, and I passed a few hikers going up the drainage, and a couple carrying climbing equipment. My watch showed only 2.5 when I got back to the parking so I decided to take the Huckaby Trail to add on some miles. I checked my map and hit the trail. It goes under the bridge right away and there is a vista of Oak Creek and the towering red rock spires on the other side. It's a beautiful canyon, marred only by the sound of cars passing on the highway.

I enjoyed views of the bridge and Oak Creek Canyon then followed the trail down steep switchbacks on an old jeep road to the creek, where the trail crosses. The creek is a perfect mountain brook, babbling and whispering over rounded rocks. I hung out for a couple of minutes just taking it in and relaxing. But I wasn't interested in getting my feet wet, so I followed the trail back up to the junction with Allen's Bend Trail and followed it to the access road for Grasshopper Point. The road obviously goes back down the creek again. I was starting to feel like I wanted to go home so I turned around and went back to the car.

In the parking lot, all the spaces were taken and people were parking in front of no parking signs and contended for the space I was vacating. That's Sedona hiking for you, or at least Sedona parking. I was glad to have gotten an early start and been able to hike for almost an hour without seeing anybody in the beginning of the hike.

It was a beautiful, perfect morning, and I was happy to have gotten in over 4 miles of hiking, all before lunch. I arrived home in late morning with plenty of time to watch Purdue knock off the #2 ranked football team in the country! That was the best Saturday I've had in a while.

I enjoy looking at the changed leaves every year. I fret at the necessity to hit a particular window of time. It's like I'm afraid I'm going to miss it. Yet I also dread the crowds and the uncertainty of finding the best colors. This is compounded by the change in elevation around the region. It's a guessing game as to which place to visit. I found some good leaves two weekends in a row now, so I'm going ahead with planning some desert hikes. 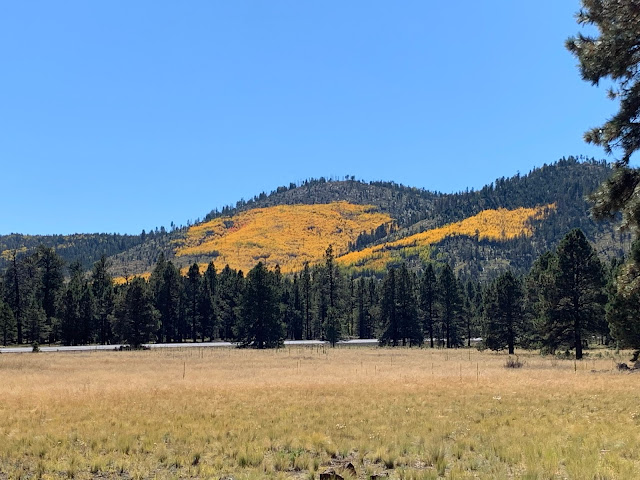 Posted by Allen Pogue at 4:12 PM No comments:

I briefly posted on Facebook about sheriff's deputies visiting the house across the street earlier today. I complained about not being to able move away from crime and associated police activity and live in a safe neighborhood. I decided to delete the post after a few minutes, even though I'm mentioning it here. But this is my blog, so I can write through the issues brought forth by the post and why I withdrew it, and explain them to myself and anyone else reading.

First: It seems like my post might have seemed judgmental. There may be people in my friends list that have been arrested before. It doesn't mean a person is a devil because they have been arrested. There are many reasons people get arrested, some worse than others, and generally most criminals deserve a second chance. Also, the deputies weren't necessarily there to arrest someone. They might have been simply serving papers. However, they certainly acted like they were prepared to be shot at. That is when I decided to herd myself and my cats back inside.

Second: I thought the post might have felt insulting to people who have lower income than me. I have had to live in a couple of "bad" neighborhoods in the past. It's one of the reasons I'm keenly aware of crime. Usually it isn't a choice to live in a high crime area. You live where you can afford to live. I think stereotypes about bad neighborhoods are not necessarily wrong in general, but might be wrong about a particular household.

Third: The owner of the particular house in question lives there but typically subleases spare bedrooms to others. So there is some question of who the deputies were looking for. Obviously it was likely to be only one of the people living there, not all of them. That said, this isn't the first time police have been at that house in force. The last time it was city police. That's what you get when you have renters in your neighborhood. No, not all renters are criminals, but criminals are unlikely to be able to buy, so wherever you have rentals in quantity, you have elevated crime rates.

Fourth: Although police activities are generally public knowledge, it kind of violates the privacy of anyone living in the house.

So yes, I am judgmental, but I don't necessarily think I need to broadcast that into my personal social network. A blog has more room for nuance and explanation, and social media is designed specifically to spread information like wildfire, and by information, I mean rumor.

Posted by Allen Pogue at 5:14 PM No comments:

One of the positive side-effects of the coronavirus pandemic is the growth in sidewalk seating. I can't specifically remember if the garden pictured existed before or not but I enjoyed it either way. If the temperatures are reasonable, it's wonderful to sit outside and have lunch and a beer. I went for pizza in the Sawmill district and enjoyed the vivid colors of these ornamental trees with McMillan Mesa and the peaks in the background. I wish I'd worn a long-sleeved shirt though.

Snow is coming next week.

The forests around and within Flagstaff are threaded through with "social trail." These are trails that were constructed without official permission of the various government entities that supervise public land. Many of these seem to be trails of convenience, connecting two points, and probably were just paths beaten into the earth by many walkers. Others seem surprisingly well-designed. I suspect many of these more designed trails are the handiwork of mountain bikers.

Some of these trails are undesirable. On Observatory Mesa (Mars Hill) on the edge of town, there are several trails labeled with laminated signs saying that the trails are unauthorized and jeopardize future access. Some property is private, other public, and some a mix of use by legal agreement. I saw both mountain bike tracks and shoe prints on these trails despite the signage.

I've wanted to explore a particular drainage that crosses an official, sanctioned urban trail that ascends the mesa. There is a well-used path that climbs up into a ravine and it is not signed as an unauthorized trail. It looks like it may have been used by vehicles at some point. I hiked from my house over to the mesa, about 1.5 miles to the beginning of the trail by the route I took (using some FUTS trail that begins along Route 66 West to avoid walking along roads the whole time). It was to be my longest hike in several months.

The trail climbs through an obvious intermittent water course. The slopes are initially close and steep, but open out into an upper basin after a short distance. There are two or three side trails but these are marked as being unauthorized. Eventually the trail turns right and climbs atop the mesa where it terminates at a T intersection with a rugged fire road.

The top of the mesa was a spacious pine forest with plenty of green grass. I went left for a while and ran into someone I know from work. It's a small town.

Flagstaff has been rainy since about June and it has continued beyond the official end of the monsoon season. More rain is expected tomorrow. The forest looks healthy. The hike ended up being a bit over 6 miles roundtrip. I'll be on call next weekend and do some more training, then I should be ready for an easy to intermediate Grand Canyon hike on my next weekend off, and I'm looking forward to it.

The mountain tops have already been dusted with snow and it's only a matter of time before we get it down at city level. I'm not completely looking forward to it but I guess I am ready to enjoy ski season. I just need to do some more lower body stretching, and it would be helpful if I would lose some weight, but I don't feel like doing that right now.

Posted by Allen Pogue at 6:16 PM No comments: