Due to some difficulties at work I did not buy airline tickets much in advance of the Christmas season (as I was not sure I would have a job at that point). I originally had in mind making two separate visits to my parents in Tennessee and Indiana but the delay in buying tickets resulted in me having to plan for a single, very lengthy stay away from Flagstaff. The logistics of such an endeavor are enough to bring down even the most optimistic person to a very low place, and I am not known for optimism (except in the sense of overcommitting to project timelines, but that is subject for another blog post).

My cats had to be kenneled. Therefore the cats required a feline leukemia vaccine, which required an unscheduled visit to the veterinarian, which I did not have a vet in Flagstaff yet, etc. I also had to figure out a way to get gifts shipped across country without checking extra bags into the airline. At least we now have the world of online shopping. Before the advent of the online store this problem was three times worse and required more advanced planning. I also had to arrange for somehow getting from Tennessee to Indiana and back to Nashville to catch my flight home, and so on and so forth. Travel, in general, is usually not that bad, but the logistics and planning of Christmas family visits will kill you.

This led up to the morning of my flight. Due to acquiring the airline tickets rather closer to Christmas than was a good idea, I was not able to get a flight from Flagstaffs very small, convenient airport, which has free parking, and had to drive to Phoenix Sky Harbor International Airport down in the Valley of the Sun (a.k.a. the Salt River Valley, a.k.a. the Sonoran Desert). I arrived 3 hours early at the airport, as planned, checked in and made it through security in roughly less than 1 hour. This gave me plenty of time to stop into the Four Peaks Brewing Company restaurant and bar next to my gate. They have an excellent Oatmeal Stout and I had a Spinach Salad with added grilled chicken. It was good but I followed up with a White Ale, which was overwhelmingly orange tasting. It was not very good in my opinion. 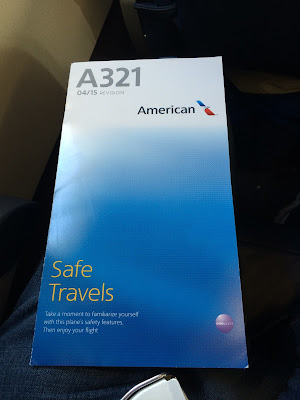 I boarded fairly normally and assumed my seat near the back of the plane, which was an American Airlines Airbus A321. The seats were wide and comfortable for economy class and I had no trouble fitting my light backpack and winter coat under the seat in front of me. I also got lucky in that there was a no-show for the middle seat (the A321 has two rows of three seats each). This was truly fortuitous considering the delays that were to follow.

After everyone had boarded, things seemed to be proceeding normally until the pilot announced that there was a problem with the fuel indicator. He then said that they would follow the recommended procedure of rebooting the computer to see if that resolved the issue. That’s right, they rebooted the airplane! I found this hilarious even as my mind wandered to worst case scenarios, like, what if they have to reboot mid-flight? Better to not even think about that.

The reboot was predicted to take “several minutes.” This quickly ballooned to about 30 or more minutes before the pilot announced that the reboot was successful but they now had to complete the mandatory FAA paperwork. This led to approximately another 30 or more minutes delay before the aircraft finally showed signs of departure. At the last possible second I got a voice mail from American Airlines that was a little confusing but seemed to provide an alternate flight number and new and later departure and arrival times from Dallas. There was also a confusing email from Orbitz that indicated the same except erroneously showed arrival at Phoenix rather than Nashville. I decided that the voice mail from American made more sense so I ignored the email from Orbitz. I’m not super impressed with that mistake on the part of Orbitz.

Unfortunately I made the mistake of shutting off my iPhone upon departure rather than just putting it in airplane mode, which would have allowed me to take photographs of the fairly spectacular desert mountains around Phoenix that were visible in the afternoon light. At least I got the phone going to take some very nice photos from cruising altitude before sunset.

Below I saw a labyrinth of mountains and occasional volcano fields while the aircraft was, I assume, over New Mexico. One of the facts about the American west that I have become aware of since I moved to Arizona if that it is dotted and pocked with volcanic craters all over the place. There are many, many more volcanoes in the United States than I original was aware of. Many of these are not huge and have not erupted recently, but they are a testament to widespread volcanic activity in the U.S. Many of these locations have erupted within the last few thousand years and therefore we can conclude that there will be more eruptions around the west in the future. If we are lucky, we may see such eruptions within our lifetime, without being turned into lava toast.


As the A321 crossed over into Texas I got nice views of the circular patterns of irrigated fields juxtaposed with oil operations, and finally, as the sunlight faded, the glowing cities of mega-populated central Texas. I’m sure I could see much of their 27 million people out the left window alone. My flight landed smoothly at Dallas - Ft. Worth International Airport (DFW) and I concluded that the A321 is not bad to fly on as long as the computer is rebooted regularly. I realized in the air that I would definitely miss my connection and wondered what should occur next but I found my new flight number on one of the boards and started looking for my gate.

In the airport I realized with consternation that I had to go from one terminal building to another. It quickly became clear that the best solution was to ride the “train.” This is an elevated contraption that runs on a hot monorail but also on a concrete paved surface with conventional wheels. The trains are two car pilotless automata that basically feel like a subway, only they are elevated to a ridiculous height. I failed to take a picture but the ride is very bumpy and you get the feeling the train is simply going to tumble over the retaining wall of its concrete slot and you will plunge a hundred feet or more onto the highway below. Fortunately that did not happen, even though it felt like it might.

I arrived at my gate with 17 minutes to spare, checked in and got my new boarding pass. I still had 14 minutes or so to get food. Fortunately there was a snack bar near the gate. Unfortunately it was about to close so I grabbed a sandwich and Mountain Dew from the grab-and-go shelf and ate the sandwich so fast it hurt my esophagus. I made the boarding onto my 737 for the ride from Dallas-Ft. Worth to Nashville and we departed on time. 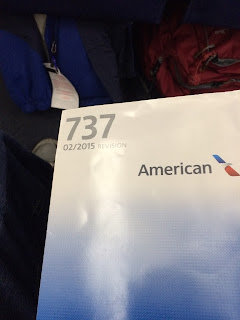 The Boeing 737 at this point is an old design, although it continues to be produced in variants  [strangely enough, I couldn’t find a good manufacturer website for this aircraft. They only have promotional pages for the next generation 737]. It was immediately noticeable to me that there was much less seat width. Fortunately the man seated next to me was thin and I was on the aisle so it was not much of an issue, except when people were walking past, which is to say shoving their way through the aircraft. I usually prefer window seats but none were available due to my relatively late booking.

The 737 is a proven, reliable aircraft, but I thought it was apparent this particular aircraft was pretty old. The ride was predictable though, and we avoided some thunderstorms that could be seen outside the window and we experienced some minor turbulence before the ride smoothed out and we landed in Nashville safely. I believe the pilot came in too fast because he seemed to brake unusually hard and locked up the wheel brakes and throttled the thrust-reversed engines to maximum trying to make his assigned ramp. It was the cause of some humor among the passengers. I was watching and he landed so close to the beginning of the runway that I thought he was going to clip the light posts so I’m pretty sure his airspeed was unusually high for some reason.

These two “short haul” airliners, the Boeing 737 and the Airbus A321 represent two different eras of the aircraft design. The 737 is a 1960s era design and is noticeably narrower than the A320 series, which emerged in the late 1980s. The A321 was introduced in 1994 as a stretch version of the A320. Both the 737 and the A321 are still in production. The progress of the A321 seems obvious but there still was the issue of the computer needing to be rebooted. Either way I arrived at my destination safely, if a little late, and I would say I was satisfied with the service from American Airlines.
Posted by Allen Pogue at 5:33 PM No comments: