I've watched anime since the 1980s when Japanese cartoons were created or adapted for the US market: Robotech, Transformers, Silverhawks, and probably some others I have forgotten. I eventually figured out that what I like about it is mostly the visual style. There isn't anything consistent about the storyline, themes, or quality. Anime isn't a single genre, there are contemporary dramas, comedies, romances, period pieces, and action movies. As such, the story is only as good as the creators make it.

In other words, most anime is bad. I have the same opinion about live action movies and animation made in the United States or elsewhere. Most of it isn't very good and you have to find the individual movies and series that are worth watching. Some Japanese cultural sensibilities differ from the English speaking world quite a bit, so sometimes there are interesting things in a fair quality anime story. In addition to the distinctive visuals, I still encounter ideas or philosophies that I've never experience in western literature or cinema. This is the value of "foreign" film.

I guess I would say that although I like anime, I've never been otaku. I'm too picky by far.

Posted by Allen Pogue at 9:58 AM No comments:


This is the time of year when I get sick of the snow, but we must admit it can be beautiful. In Flagstaff, snow tends to not persist on paved surfaces as long as it does in more humid climates. I'm grateful for that. Having grown up in north central Indiana, I had to deal with long winters with grey, overcast skies for weeks on end, and persistent ice and snow on roads for weeks after a storm. We also got frigid blasts of sub-zero (Fahrenheit) temperatures from northern Canada. I was once out in 24 below when I was in college. Once you get to about 10 below, any exposed skin feels immediate pain. I can't recommend it.

Flagstaff isn't like that. Here we have lower latitude, which means more direct sunlight, and higher altitude, which means a thinner atmosphere with lower barometric pressure. We are also surrounded by desert, so even when we get heavy snow, very dry air moves in behind the storm and the snow just transpires away, or melts and then evaporates. This doesn't work as well between the winter solstice and the end of January, but by the time you get well into February, the days get longer and the sunlight more direct, and snow quickly disappears from the roads and trails, though it remains longer under the trees.

And that means I can get out and jog again, and on warmer days, bicycle. So I hope to get out there within the next week or two. I just need to get past this next storm on Tuesday . . .

Posted by Allen Pogue at 4:04 PM No comments:

I'm kind of in a personal tailspin at the moment. On the one hand I've gotten two doses of the Moderna COVID-19 vaccine and my health is improving due to some changes in diet and exercise. On the other hand, I've lost some very important-to-me things and generally feel like I'm running behind. I also realized that the protagonist of my new novel is probably the least interesting character in the story. That isn't good.

My creativity has been running high, and I finished a painting for the first time in about a year, but I have cabin fever and would prefer to be outdoors recreating rather than in the house paying bills, doing taxes, and drawing. 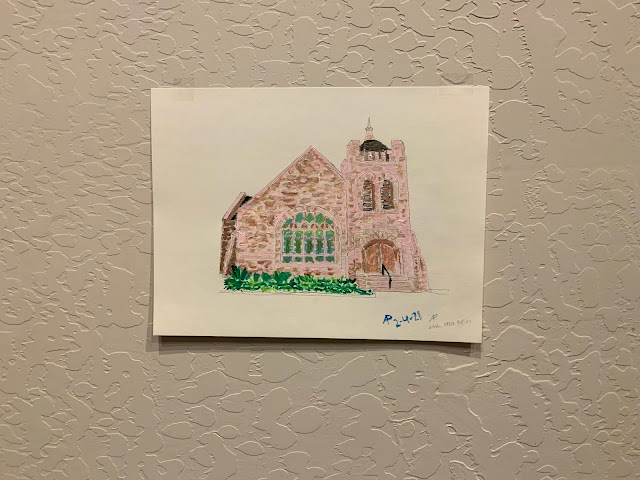 I got out last weekend to test out my new skis and enjoyed that, but it isn't the same as a good hike or bicycle ride, and the city is still buried in snow right now. Anyway I'm on call this coming weekend.

Some days you just want to pound your head on the wall.

Posted by Allen Pogue at 8:33 PM No comments: