Although there are a lot of things to do and see around Flagstaff, I make a point of doing road trips from time to time to hit up some points more distant around the region. It's the type of thing I have always done but I think the variety available is probably even greater in northern Arizona than where I was living before in Chattanooga. New Mexico is not that far away and one of the differences between driving in the east and driving in the west is that there are fewer exits on the interstate, fewer towns to drive through, and higher speed limits, so New Mexico seems relatively near. Generally it is fairly easy to travel by car in the wide open landscapes of the American West (when the weather is good).1 I waited for a weekend when I was not on call and executed a plan to visit the Zuni Mountains, just outside Gallup, New Mexico, for mountain biking.


The drive was one of the most enjoyable parts of the trip, crossing over a broad swath of the Colorado Plateau.2 Combined with a recent trip to the Kingman, Arizona area, I have crossed over most of the plateau in the last month on the east to west axis. The directions were practically as simple as possible, involving only four roads, since the mountain bike trail head was on the same road as the exit. This was a good thing since I wasted quite a bit of time in the morning and got a late start, leaving me only just enough time to ride a decent distance. If you follow this blog then you may noticed that getting a late start on the weekend is one of my habits (faults?). As it was I got a little nervous after I got deep into the forest and the signage was not clear, and daylight was getting short. I hate it when I put pressure on myself like that, but I still managed to enjoy the ride and had some remaining time to drive around looking at the scenery before nightfall.


The Zunis are not a dramatic mountain range with high, prominent peaks, although they rise to well over 9,000 feet above sea level. It is an old range and is highly eroded so that it resembles more of a rolling plateau. The Zunis are part of the ancestral Rocky Mountains although I do not think they are considered to be part of the current Rockies, nor do they have the character or feel of the Rockies. The Continental Divide runs through part of the range although I did not get particularly close to it. My GPS track indicates that I was riding roughly between 7,200 and 8,000 feet above sea level but unfortunately I did not enjoy any wide open views on the ride. What scenery exists is lovely though, with pine forest interspersed with unusually tall oaks for the southwest, a few aspens, and the occasional grassy meadow with views of low hills relative to your perspective.


I chose to ride from the Hilso Trailhead near the McGaffey Recreation Area, directly off New Mexico 400. It was extremely easy to find as there is an exit for 400 off I-40 and you just head south for 8 miles. The trail system is quite nice although it seems to be relatively lightly traveled compared to what I'm used to, which made riding solo a nervous business. I usually ride alone and one of these days it may not end well. I really can't allow myself to crash hard and I don't even like thinking about the mountain lions. I usually like to hike armed but it isn't convenient to do that on a mountain bike and anyway the lions are ambush predators and likely would just pounce me from concealment. Mountain bikers have been taken out that way in the past. I try to be wary but not let it stop me from getting out and enjoying the world.


I chose to ride the Quaking Aspen Trail, but due to daylight and fitness issues I ended up choosing a shorter loop that involved relatively few aspens. If I had arrived earlier I might have pushed harder to get to the high point of the trail system, where I'm sure there were more aspens. In the past it would have irritated me to not be able to tour the entire trail but I guess I'm getting old and complacent so mountain biking has become a much more casual endeavor for me. I checked my distance on Strava and noted that I'm probably behind for the year compared to 2014, although I certainly did not run for most of last year and this year I have 40 runs. To a certain extent running has replaced some of the bicycle time from 2014 to 2015. The problem was that I just didn't ride often enough and ended up gaining a lot of weight last year so I took up running again. Frequent running sometimes causes me injury but it really is the easiest and most convenient calorie burning exercise available. Contrary to intuition, being in shape for running does not mean you are in shape for bicycling.


Anyway, back on topic, the Zunis were nice to visit and some of the scenery on the drive is spectacular and features classic western landscapes. The trail system was for the most part extremely smooth riding and I would probably ride it again but only if I had another reason to be in the area because I like trails with bigger views. All in all it was a nice diversion and I also checked off another state that I have mountain biked in. The count is currently at 8 (Indiana, Tennessee, North Carolina, Georgia, Alabama, Colorado, Arizona, and New Mexico). 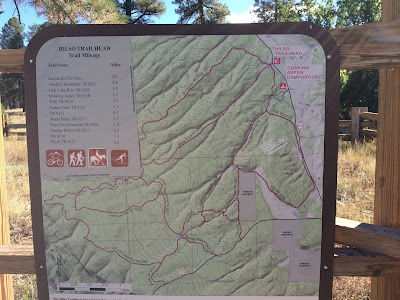 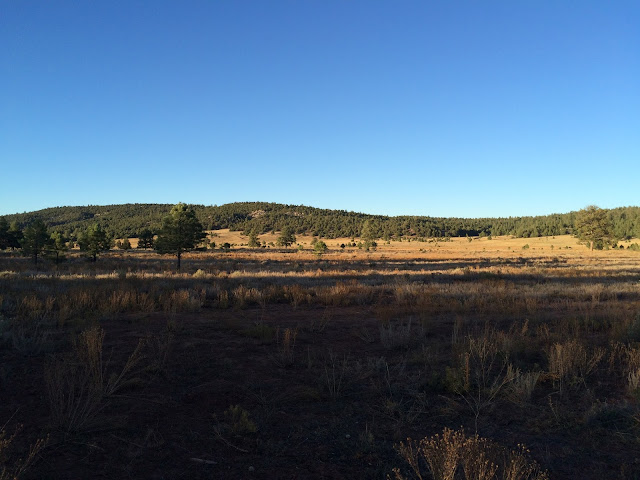 1. Flagstaff got 15 inches of snow the day I arrived in town. The weather wasn't actually that bad crossing the eastern parts of the Colorado Plateau until I started to get close to Flagstaff, where I encountered freezing precipitation and eventually outright snow.

2. I enjoy driving, mostly for the landscape rather than the act of steering the auto. One of these days I'm going to publish a long running draft that I have of why I think this is justifiable for my environmentalist friends. Although I consider myself to be environmentally aware, I pretty much detest the slogan "Think globally, act locally." I think we should do the exact opposite. The problem isn't that I'm driving, the problem is that I can't buy a truly low emission vehicle for a reasonable price. Local action is useless if it is not implemented across the entire planet (and other states will take advantage of that). Leaders of environmentalism have thought themselves into a box on issues like this and at this point are mostly making enemies rather than progress.
Posted by Allen Pogue at 6:46 PM No comments: