I headed back up to the Smokies again to hike the Appalachian Trial up to the lookout on Mount Cammerer. I took an unusual route from a lightly used trailhead at Davenport Gap on Mt. Sterling Road right on the North Carolina-Tennessee border above the Big Creek area. There are two advantages to starting from this point. First the road ascends a good bit before you get to the trailhead, saving some climbing. The second advantage is that access from Interstate 40 is less than 10 minutes. That's hard to beat. The disadvantages are limited parking (it wasn't a problem for me), poor security due to the remoteness of the trailhead, and I think it's a little longer distance to the summit (5.8 miles - 11.6 round trip). As usual with the Appalachian trail there were relatively few switchbacks making for a very steep hike up to the summit. I left way too late in the day but pushed hard to the top and got away with it - no bad weather in the afternoon and I was rewarded with cool breezes and spectacular views.

Video of a walk around the Mt. Cammerer lookout.

I really enjoyed this hike quite a bit but I definitely recommend good fitness and an early start. I didn't start until 12:45 pm and pushed too hard trying to get to the top in time to make it back to my car by dark and hopefully beat any late afternoon thunderstorms. As it happened I got lucky and didn't get rained on. I also didn't take enough fluids and wished I had taken my 70 oz. CamelBak Rogue. Live and learn. Great hike anyway!
Posted by Allen Pogue at 6:07 PM No comments:


(It’s out there people. You just have to be willing to go get it.)

[Sorry for the poor quality of the photos - I forgot my camera and had to use my iPhone.]

Having celebrated Father’s Day on Saturday, my Sunday was available for High Adventure. In recent years, doing the Same Old Things with all of my friends has become less interesting. What really gets my attention is doing The New, The Unknown, The Exploratory. Since I had been on the road 3.5 hours Saturday, I wanted to stay nearby, yet I wanted something novel, that I had never done before. I thought of the few places locally I have not ridden my mountain bike, and the Clemmer Trail popped into my head.

The Clemmer Trail (Cherokee National Forest Trail Number 302) is known as a screaming downhill that drops nearly 1000 vertical feet from the top of Chilhowee Mountain in Polk County, Tennessee – a mere 50 minutes from my house in Ringgold, Georgia. It was time to go get it – only having no shuttle vehicle I would have to earn it, by climbing Chilhowee Mountain before I could descend it.

After I got done pissing around with my bike (having forgotten to lubricate the front axle for 3 rides – it was squeaking like a rusty hinge), I finally got started and headed up the waterfall trail to check out Clemmer Falls, 1.7 miles out – 3.4 miles round trip. Things went reasonably well for a while, but eventually I hit a stream crossing that was unthinkable to peddle through. I’m sure there are some hot shots that can take it on, but I needed to carry and rock hop. It wasn’t terrible.

A couple more hike-a-bikes, a second stream crossing, and some root hopping and I was at the falls. Beautiful – the falls are well worth the effort and I didn’t have to get off the bike too many times . . .


After this I headed downstream, hopping off the bike only for the worst of the chunkery, rockery, over-the-handle-barsy bits of hiking-not-biking-trail. It took only 20 minutes or so to traverse the return from the trail before I hit a connector that led over to Trial Number 302, the notorious Clemmer Trail that leads from the Highway 30 parking area to the top of Chilhowee Mountain. I cheerfully followed the short connector up to the 6 feet wide path that is not too steep but is absolutely relentless.

I cranked up the trail for 10 to 15 minutes without stopping, encouraged by the increasing signs of success visible through the trees to the right as I ascended the mountain. A ravine, then a vast gulf opened up on the right and still I kept climbing. After a while, I began to feel the fact that I was not nearly in the physical condition I had been in when I went to New Mexico and Colorado in 2011 to ride above the tree line. As usual, my lungs and heart were holding out fine, but my traitorous legs were acting like sissified little princesses. I pushed them for a while and eventually out-climbed the worst of the insects but after a quarter hour or so I had to stop. The bugs caught up and swarmed viciously. Driven forward by the swarming bugs, I managed to ride for quite a while again before having stop. This process continued for several iterations. Eventually I got to the point that I had to hop off the bike and let my gelatinous legs rest. It was a very disappointing performance.


After a half mile or so of alternately riding and hiking my bike up the mountain I finally noticed the trail leveling off and I encountered a beautiful slick rock stream crossing. Off to the right I could see the stream continuing over bedrock down the mountainside. It’s an inspiring moment to think of the water cascading down moss-slicked rock all the way down to Clemmer Falls. The cool air wafting up from the moist ravines at the top of the 2500 foot Chilhowee Mountain reinforced the feeling of the moment. But the coolness and the shading from the increasing cloud cover served to remind me that I had not gotten an early enough start and yet again I was on top of a mountain with potential storm clouds building in the mid-afternoon. I rushed on to get to a point that I recognized from previous rides – concrete evidence that I had made the climb complete. Finally I came upon a trail junction with one of the slick rock trails on top of Chilhowee that I had ridden the previous fall. It felt like a major accomplishment. I took a picture of the sign. Then, worried about potentially developing thunderstorms, I headed back.


The trail downhill was not as much fun as I expected from a descent of several hundred feet. It was just a little too rocky for someone who rides platforms. I had to bear down hard on my overheating brakes to the melting point to keep my speed checked enough to avoid sheer terror or over-the-handle-bars-over-the-bluff disaster. Plus I stopped to take advantage of a couple of views that I had somehow missed in my leg-killing ascent from the trail head at the base of the mountain. Eventually I got back to my pickup truck, but not before missing the connector trail to the parking lot and ending up at the end of the fire road on US Highway 64 overlooking Parksville Lake. I pulled off a deer tick and made my way around the corner onto Tennessee State Highway 30 and back into the parking area and enjoyed my Diet Mountain Dew before heading home. EPIC ride – just the way I like it – so much better than sitting on the couch watching American Idol.

It’s out there people – you just have to be willing to go out there and get it. Never be afraid to explore or you’ll miss all the best stuff.

SYOT  - See You On the Trail

I cancelled my plans to paddle whitewater Saturday, June 9, 2012 in favor of a long day hike in Great Smoky Mountains National Park. My interest in the sport of paddling has waned somewhat in recent years and some switch flipped inside my head that has sent me back into the high mountains for some altitude. I think it is a consequence of my life-changing experiences mountain biking and hiking in the Rockies in 2010 and 2011. The best mountains we have in the Southeastern United States are definitely the Great Smoky Mountains and they are thoroughly protected by a National Park and thoroughly threaded through with over 800 miles of trail. I’ve done a good bit of hiking in the Smokies already but have had the urge to explore some new trails and see some new sights. I selected from the countless options to hike along the Appalachian Trail to access some wonderful overlooks named Charlie’s Bunion (Fodderstack) and the Jump Off. The mountains in this region of the range are my favorite because they are somewhat rockier in character and feature very steep slopes and cliffs much like what you find in the Western United States. 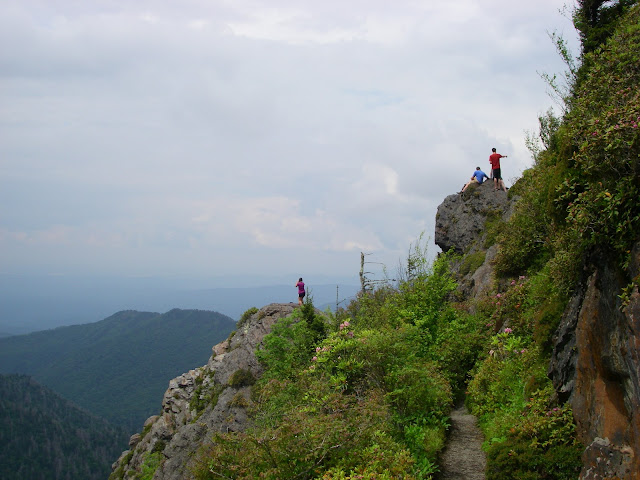 Figure 1  The approach trail to Charlie's Bunion. The colors of the wildflowers did not come out well but it's a beautiful little segment of trail considering the view and vegetation. 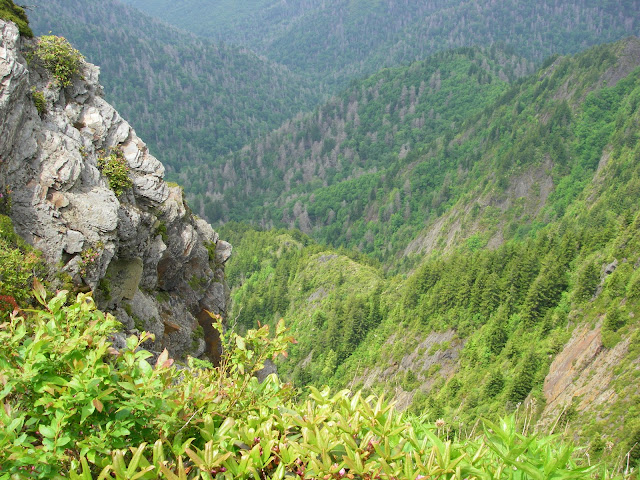 Figure 2  The view off one side of the Bunion, showing the rocky character and steep slopes of the surrounding mountains. Looks like the Rockies more than the Smokies. 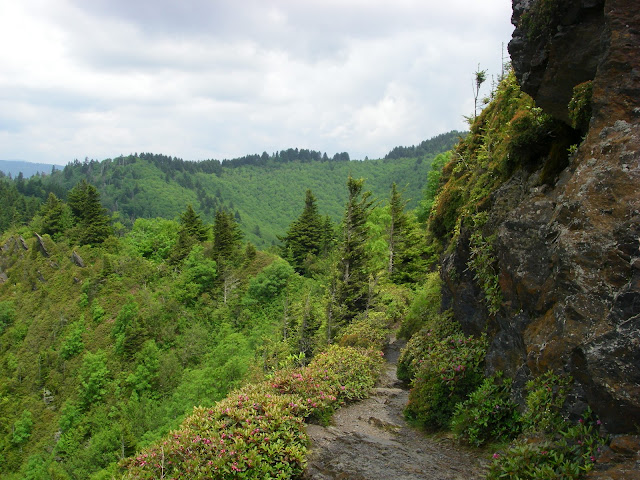 Figure 3 Wind flagging of the trees along the crest of a ridge near the Bunion. 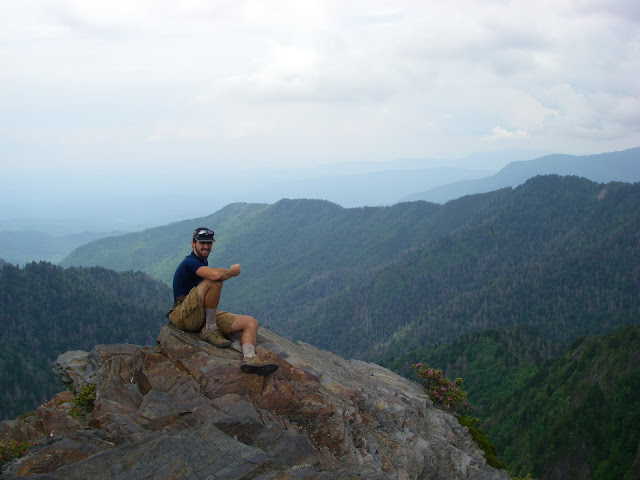 Figure 4  Some dude out on one of the riskier parts of the promontory. I didn't have the guts to climb out that far and unfortunately it was never unoccupied while I was there so I couldn't get a wide open photo. 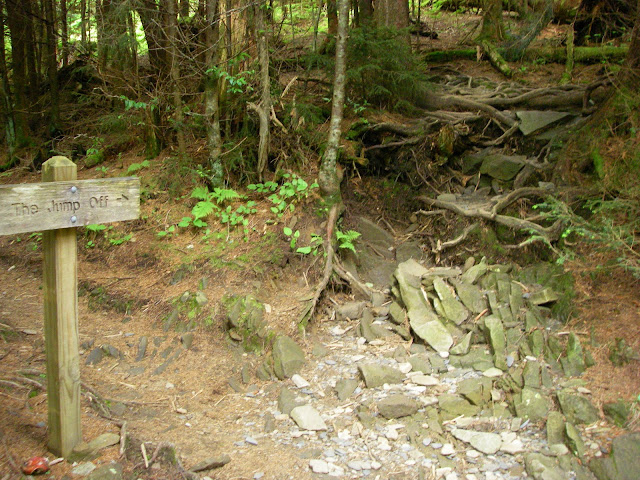 Figure 5  The trail to the Jump Off looks like a stream bed dumping out onto the Appalachian Trail. This is foreshadowing of the character of the trail. It's pretty rugged but not too long so it's worth the hike. 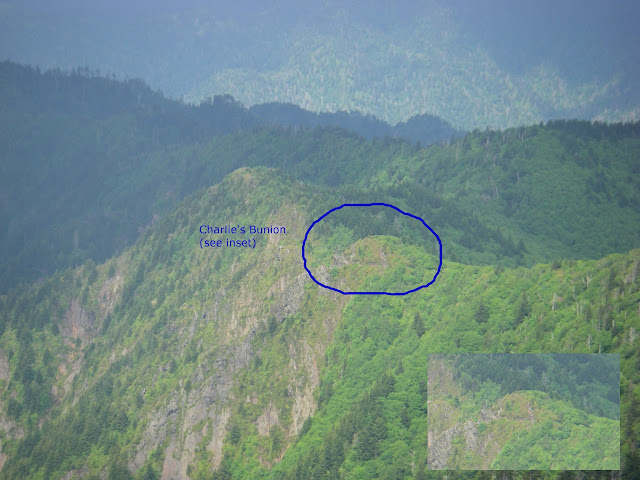 Figure 6  The view from the Jump Off towards Charlie's Bunion. You can't see it in this photo but there were people still climbing around out there. The inset helps to clarify the ledge the approach trail passes over (refer back to Figure 1). 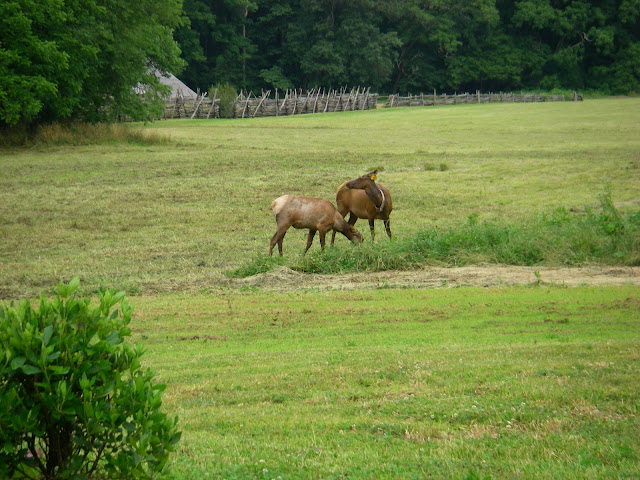 Figure 7  Elk browsing by the Oconoluftee Visitor Center. The last time I saw Elk was at a vistor center at Rocky Mountain National Park. It's good to see Elk returned to the Southeast after a long absence.

The total distance I hiked was around 9 miles, all of it above 5000 ft of altitude. I was tired but pleased. This was definitely one of the best hikes I have done anywhere. The main problem with it was the teaming crowds. This is one of the most heavily hiked trails in the park and so is a good candidate for a weekday visit rather than a weekend visit. Still, it was an awesome experience.
Posted by Allen Pogue at 12:21 PM 1 comment: