Lois and I decided to get out for some hiking on Sunday, March 3, 2013. After considering different options we agreed to meet in Trenton, Georgia to head over into Alabama to DeSoto Falls State Park for some waterfall viewing. I'd been to DeSoto Falls a couple of times but for some reason had never explored the rest of the park. There are a number of other small falls and several miles of hiking trails, not to mention access to the West Fork of the Little River. All of this is located on top of vast, flat topped Lookout Mountain.

DeSoto Falls is located on a side road before you even enter the main part of the park, if you are coming from the Georgia side. It has two distinct drops located below an old dam originally constructed for hydroelectric power. It's an impressive waterfall with a huge pool below that varied from emerald to deep blue on the day we were there. Unfortunately due to terrain and private property it's somewhat difficult to view the falls. You are restricted to a side view. It's still beautiful.

After that we proceeded on into the park proper and stopped at the ranger station and picked up a free map and some advice from the duty ranger about how to view the other waterfalls. There is a small network of trails that leads you across the relatively flat top of Lookout mountain along a small creek to views of small but lovely waterfalls. We hit the trail system starting at the boardwalk and explored counter-clockwise. 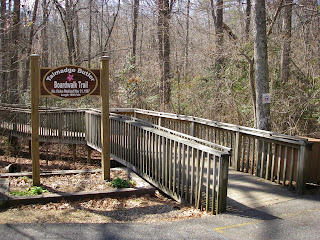 We came upon this incredibly cool mass of sandstone where the trail wandered onto high ground and climbed up onto it. It had a twisted up pine tree on it and featured smoothly weathered pits and potholes in it, with sand collected at the bottom of depressions. It was one of my favorite things.

After we looped back to the car we crossed the road and proceeded clockwise on the other half of the trail system, which visits two more falls and then follows the West Fork of the Little River for a quarter of a mile or more. As a paddler, my mouth watered at the river. It has a number of rapids in that section and looks like a very nice class II-III creek, similar perhaps to Clear Creek, Tennessee, located on the Cumberland Plateau. It amazes me that Lookout Mountain is a big enough geographical feature that it can have an entire watershed located on it with a medium sized river that finally flows out into the lower elevations of Alabama in the spectacular Little River Canyon nearby. As is often remarked in the three states that Lookout Mountain crosses through, it really would be considered a "mesa" if it were located in southwestern North America.

I happened to overhear some park staff referring to a beaver dam on the river so that would bear in mind if I manage to get a group together to run it before the end of the free flow season. Of course, it sounded like they were planning on destroying it, but it's still valuable information.

Lois and I somewhat lost track of the correct trail for a while but managed to get ourselves reoriented after a time and eventually we found the final waterfall, Lodge Falls, apparently named due to the large lodge just above the rim. It was a difficult waterfall to view, although I clambered down a steep trail and into the trees to get some partially obstructed photos. It was a nice hike but ended up being longer than we had hoped.


DeSoto Falls State Park is an excellent place for waterfall viewing. It seems to me it is sort of Alabama's answer to Fall Creek Falls State Park in Tennessee (one of the best state parks in the country). It's not nearly as good but it's still well worth going if you like waterfalls and are willing to do a little bit of hiking to see them. There are some mountain biking trails there that I'd also like to check out sometime.

We finished up the day with dinner at the lodge restaurant. I was very skeptical at first because it was off season and I have not had good experiences previously eating at tourist oriented restaurants in the off season - but I was completely wrong. The server was friendly, the salad bar was fresh and beautifully presented, and the chopped steak was delicious. I'd heartily recommend it if you are in the area. Plus the prices were reasonable.
Posted by Allen Pogue at 6:25 PM 1 comment: