I like to visit Great Smoky Mountains National Park at least two or three times a year for some hiking and general sightseeing. Normally I prefer the high country of the Smokies since they are among the tallest mountains east of the Rockies, but in the winter the higher elevations tend to get into a snowy and/or icy state that makes hiking on steep, treacherous trails difficult, so I searched for some low elevation options good for a late-February Staturday. I turned up one of the hikes that I have wanted to do for some time but have never gotten to yet, the Laurel Falls trail.

Laurel Falls is easily accessible from Little River Road on the north side of the park and is only a 1.3 mile hike from the road. That is part of the problem. It has a reputation for having too many visitors. The trail head is located in a small gap that has inadequate parking, resulting in the presence of large overflow parking some distance down the road in both directions. It ended up being an unseasonably warm day for late February so it was pretty crowded but we got lucky and I scored a parking place in the gap.

The trail is completely paved nowadays, providing wheel chair accessibility to the falls, although we only saw strollers making the trek in addition to the normal foot traffic. The trail mostly ascends to the waterfall so it's not quite an easy trail but the short length and paved surface guarantee that you will still experience heavy traffic unless you go at some very unusual time or a day with bad weather. I've considered going to Laurel before and received nothing but discouragement from my acquaintances due to the crowding, but I was determined to put up with the crowds just to make sure I could check the waterfall off my list.

Laurel Falls is pretty but would be much better if the park service routed the trail to the bottom of the waterfall instead of over a bridge that is right in the middle of the drop. While interesting and fun to be essentially in the middle of a waterfall, it would be much easier to view if you could stand back a bit. There is little chance to appreciate the full length of the drop without some truly sketchy bushwhacking off trail down a very steep slope. Normally I probably would have gone for it but there were so many people there that it would have made the view less worthwhile. In addition, my companions were not likely to want to try to slope so would have been waiting on me. I decided to stick to the trail. We ate lunch on the rocks and the place got steadily more crowded until it was literally standing room only.

Somehow I managed to capture this short video of the upper drop of the falls without getting a human in the picture, although you can certainly hear them. There is more below the bridge but no easy way to get down to where you can photograph it.


I understand that Laurel Falls is considered one of the jewels of the park but it definitely could be a much better experience and I'm surprised the tourism literature and guide books talk it up as much as they do considering how poorly designed the trail is and the chronic overcrowding. Nonetheless I can now check it off my list. I've now knocked off most of the very highly visited attractions of the park so I can resume my exploration of the less visited spots and not have to put up with paved trails and crowds as much, although you never truly get away from that issue in GSMNP. Still, it's a beautiful place and any day in the park is a good day. Since it was a short hike, I had planned on a visit to another short trail that would be less traveled - story to come in a future post!
Posted by Allen Pogue at 11:10 AM 1 comment:

Chattanooga Mountaintops and the Bragg Reservation

I'm in 7-days-a-week mode for work but I managed to get out for a couple of hours for a ride on Raccoon Mountain on Sunday and still had enough time to find the Bragg Reservation on Missionary Ridge. We got 6 to 10 inches of snow in the Chattanooga area with the exact total depending on elevation and location on Wednesday of this week. It got above freezing and started melting off almost immediately but it takes a long time for that much snow to melt and it persisted longer on the mountain tops.

I had a strange encounter with another rider that wanted to know what sign I was riding around. This was, I have no doubt, a reference to the fact that the trails were closed. I was not intending to ride around any signs so I quickly diverted him. If it's too wet then riding pavement and gravel is a perfectly good substitute for trail to me. He then began to fabricate an elaborate lie, in which he pretended to be poaching trail, yet interrogated me about what single track I had ridden recently. I'm pretty sure that was because I had some dirt on my bike leftover from a ride the previous weekend at the Chickamauga Battlefield. By this time I figured out that he probably was not really wanting to ride anything but rather was a "trail Nazi," one of the people that take it on themselves to police who is riding the trails when the conditions are too wet to tolerate a bicycle. While I agree with the idea of not riding when the trails are too wet, I think it's pretty lame to lie, and act like some kind of trail detective, and stupid. I'm not sure if he was planning a full on confrontation if I had said I was going to ride trail but I was annoyed either way. I also think he would have concluded from the small amount of dirt on the bike that it could not possibly have been recent as there would have been much more. I don't always clean my bike after every ride - sue me.


At any rate I had a very nice ride on the road, with a side route up the one good gravel road that leads for a half mile or more up to a cell phone tower complex near the eastern crest of the mountain. There was only one area of shade with snow, but it was just a little bit of wet ground and didn't slow me at all. I had to skip the other section of gravel road by the dam because it was still fairly covered with snow. I'm still out of shape due to the short days of winter and unwillingness to hit the stationary bikes in the fitness center at work so I took it slow on the hills and enjoyed the scenery. Incidentally, I did see a few people poaching the closed trails off in the woods but also saw a few other people riding mountain bikes on road like I was.

After finishing my ride, I decided I had plenty of time to go look for something else I've been wanting to check out for the last year or more, the Bragg Reservation on Missionary Ridge. After wandering through the steep, hilly streets of East Ridge, Tennessee, I found it. It's a Civil War site, the location of the headquarters of Confederate General Braxton Bragg during the siege of Chattanooga in 1863. At that time, the Union forces were occupying the town and the Confederacy hoped to contain any Union advance. The effort failed spectacularly when Union General Ulysses S. Grant ordered an attack on Missionary Ridge and the Confederates broke and ran. The reasons for this rout have never been fully explained but it appears that some of the Confederate positions atop the ridge were constructed too far back from the edge and the Union forces were able to climb the ridge without being subjected to rifle and artillery fire until they had already gotten to the top and it was too late to stop them. At any rate, the defeat led eventually to the burning of Atlanta and the sacking of much of Georgia and South Carolina. It was a disaster for the Confederacy and perhaps cost them the war (although everybody always says that about every battle).


It's an extremely neat place and offers great views of Chattanooga.

Here is the Strava from the ride on Raccoon Mountain.

A friend invited me to check out the property of the Lula Lake Land Trust on Lookout Mountain, a place I have been a few times before but always willing to return. The property is normally closed to outside visitors except a few days a year referred to as "open gate days." The land contains a variety of hiking trails that run over the gently hilly terrain on top of the mountain, rocky cliffs with overlooks, and the gorge of Rock Creek. The main features of the hike are Lula Lake itself, which is really just a rocky plunge pool at the bottom of a cascade, and a high waterfall that drops Rock Creek into a short gorge where it plunges down steeply to Chattanooga Creek far below.

We started out by hiking over a small foot bridge into the trail system on top of the mountain. That brought us up to the overlooks before reaching the waterfalls. I put my friend through the ringer because I wanted to get in a little distance on the hike so we proceeded counter-clockwise through the trail system. This forces you to hike a couple miles before you get to any good scenery, but on the other hand it brings things to a crescendo right before you get back to the car so that you will have good memories of the hike. 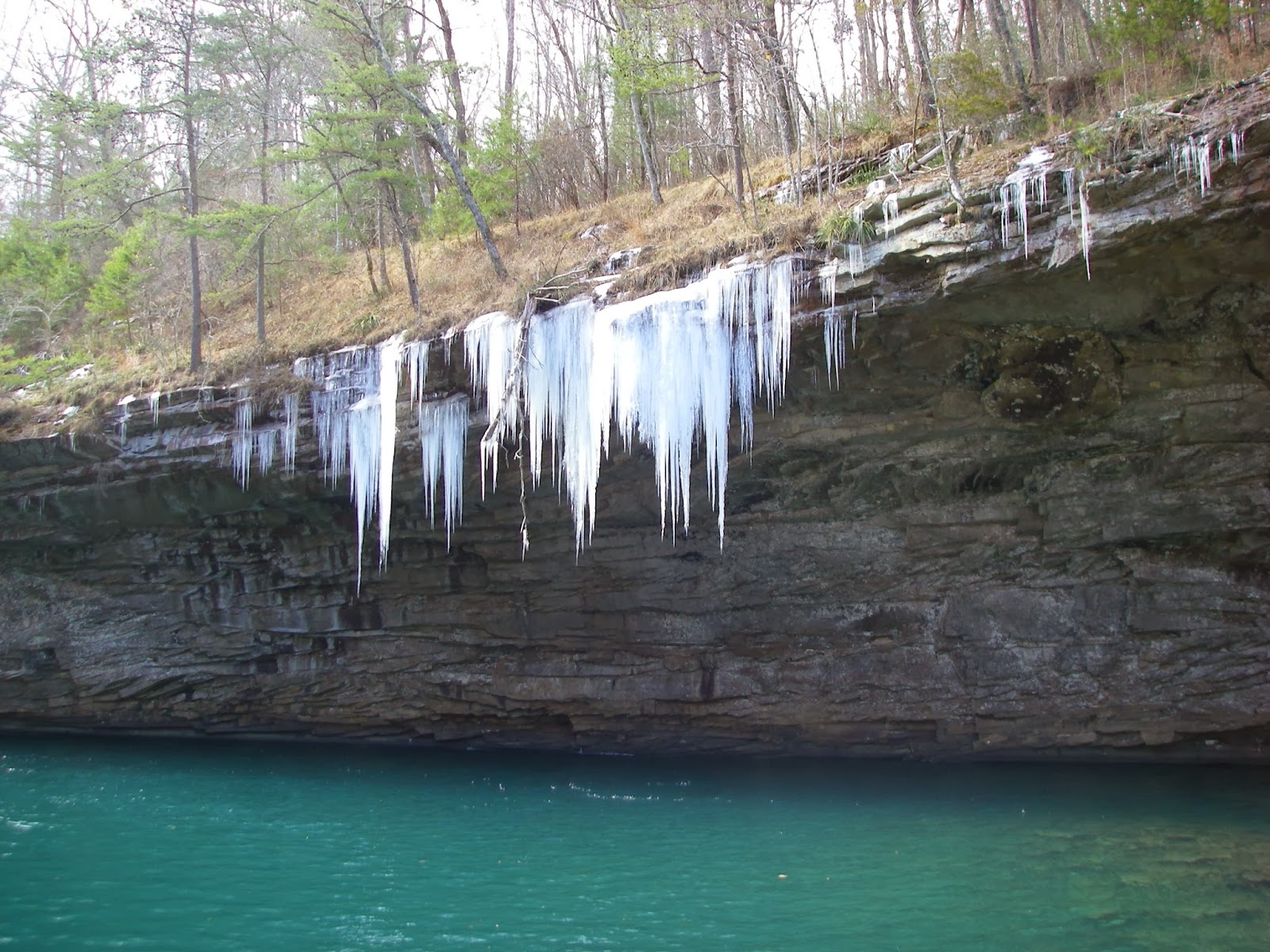 I've been to Lula Lake several times and I believe I once hiked every inch of trail with the Chattanooga Hiking club, but it never fails to impress so I'm usually up for return trips. In this case the ice really added some beauty to the visit. It's also extremely close to my home in Ringgold, about a 30 minute drive, so it's convenient to have something so spectacular so nearby. I can remember when I used to live in places where it was an all day drive to get to something like this.

For my whitewater friends, Rock Creek has been run, although generally speaking the property is closed to paddling, and the less said about that the better. I will never run this class V+ creek, but it has great scenery for a hike.

Here is the Strava track. We went out of our way to hike extra but the waterfalls can be reached with a 5 minute walk from the parking area if that is your priority and you proceed clockwise.

Posted by Allen Pogue at 3:45 PM No comments: