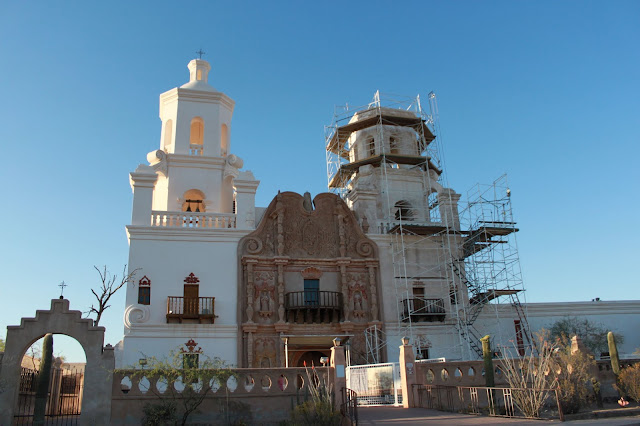 After supper on Day 2, I decided to go for the evening light at the Mission San Xavier del Bac, a church on the Tohono O'odham Reservation just outside Tucson that dates back to the Spanish colonial period. The Tohono O'odham are an indigenous people of the region. Construction began in 1783. I was originally planning to get up before dawn and drive over for the morning light, but decided I probably wouldn't want to wake up that early and anyway it might be a little discourteous to the neighbors around the Airbnb to leave quite so early in the morning. 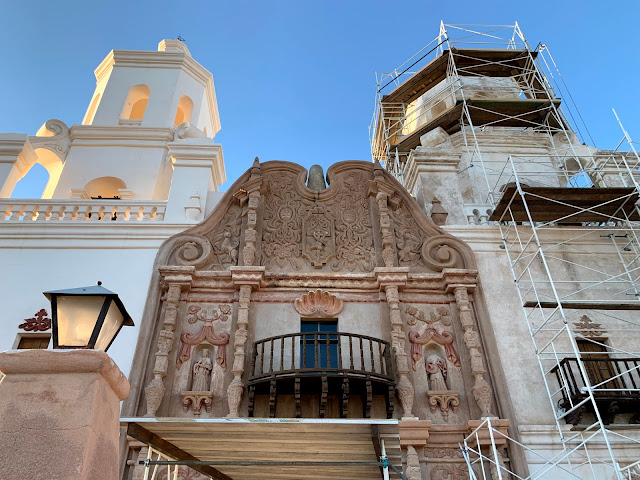 This turned out to be a good decision. The light on the church was gorgeous and there were few people, the concessions having been closed for the day. It meant that I didn't have an opportunity to donate any money to the church, which I would normally have done. It's a functioning church and I'm sure they could always use the money. I also did not have an opportunity to go inside the church, as tours are offered. However, having seen photos of the inside of the church, it's ornate but not as beautiful as the outside, and that's the best I'll say about it. You can do a Google image search if you are curious. 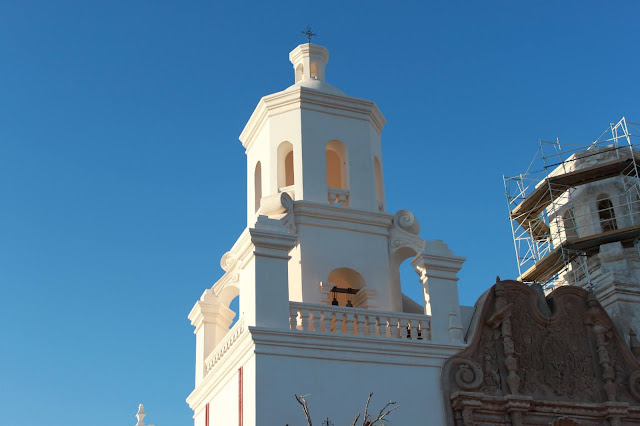 As you can see, the mission is still under renovation, but the left tower is complete and beautiful.

Posted by Allen Pogue at 3:15 PM No comments:

Spring in the High Country


We have entered one of my favorite times of year. The days are warm but not hot. The grass has greened. The grasshoppers buzz and jump.

I went for a hike last Saturday on the Deer Hill Trail on the lower slopes of the San Francisco Peaks. The hike went through a burn scar from the Schultz Fire. It's been many years since the fire so despite being called a "scar" the area is beautiful and is being recolonized by pine trees. Since the young trees are still short, you get sweeping views of the inner core of the peaks, as well as views in other directions of the Cinder Hills, the Sunset Crater volcano, Anderson Mesa, and points beyond.

The hike was quiet. I saw a group of three hikers and a single bike-packer. Other than that I saw four pronghorn, the first I've seen in about three years or so, and one snake, which I haven't been able to identify. Nothing will make you watch your step like coming upon a snake sunning itself in the trail.

I went with about 2.5 liters of water in my Camelbak, but as I do so often, got carried away and hiked the whole trail - over 11 miles out-and-back. I ran out of water and the last couple of miles were a little bit of a death march. But now I've done it and don't have to do it again. The trail looks like it would be great for mountain biking. It's just my type of trail: smooth and non-technical. Next time I'll bring my bicycle. If I go back to hike, I'd likely not hike the entire thing. I was limping all day Sunday.

I'll have to get in better shape if I want to hit my goal of doing another "big hike" in the Grand Canyon this fall.

Posted by Allen Pogue at 4:36 PM No comments: 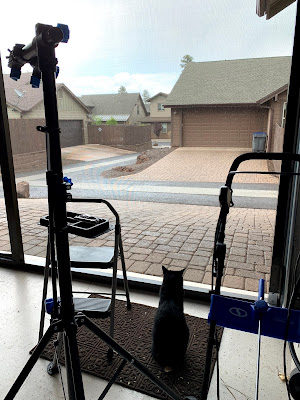 Rain! It's been a while since we've had more than a few sprinkles. Kitty and I watched a short but thorough downpour today. There was even a little thunder and some graupel.

The last two years of drought have been oppressive on the mind, especially since we also had to endure the coronavirus pandemic. At least we have a few days of reprieve from the fire danger.

Posted by Allen Pogue at 6:44 PM No comments:

I toured the town via car and eventually drove over to the University of Arizona campus to have a look. It was a school I was tempted to apply to when I was graduating high school but decided it was not viable. The campus is mostly unremarkable except for a particularly dramatic green or common lined with palm trees. It looks like something more appropriate to Florida. They also have an interesting street car line that I didn't think to photograph. Other than that it is a pretty typical large university.

By that point I had pretty much had enough of the city and was ready for some outdoor adventure and scenery. I went over to the Tucson Mountain County Park to view the saguaro cacti. This is an amazing park adjacent to the western division of Saguaro National Park in the small Tucson mountain range. Rain clouds were threatening but I never got more than a few sprinkles so my escape from the very, very long winter in Flagstaff was successful, and the clouds were lit from a low angle by a revealed sunset to create beautiful views of the mountains and desert. It was spectacular!

The hour was getting late so I did not do any real hiking or riding but it was still worth a visit.
The next day, I did some mountain biking. I visited a local mountain bike trail system called Fantasy Island. There I rode winding trails through mostly flat Sonoran Desert. It was light on saguaro but heavy on cholla and other desert plants and I came across a pink rattlesnake at one point. I kept my distance. Later research indicates it was a Mojave Green Rattlesnake (even though it was pink). This is the most poisonous of the rattlesnakes.
Fantasy Island was a decent trail system, but not something worth driving several hours for on its own. It's right next to an Air Force base and I got the feeling most of the other riders there were off duty military. My Dad served 27 years of combined active and National Guard duty and you get to where you can tell, even if they aren't in uniform.

The next bicycling location on my list was Mount Lemmon. I wasn't in shape for trails on this notorious mountain, but I wanted to get up out of the desert into the high country, and the Mount Lemmon Highway itself is well-know for scenery. This turned out to be an understatement. I have driven many scenic drives but this is one of the tops I've been on anywhere. The drive up into the high country was winding and somewhat busy with traffic and bicycles. I have to admit there was some type of permit system in place but I couldn't figure out how to get one, so I took a chance. I simply found a place where I could park and ride at least a couple of miles near the top, with open views onto the lower slopes of the Santa Catalinas and adjacent mountains, such as the Rincons.

By now, my knees were shot and my leg muscles dead. I wasn't yet fully in shape from moving to Arizona, though I had adapted to the altitude at least. The Mount Lemmon highway exceeds 8000 feet above sea level. The air temps were drastically cooler than in Tucson. I rode a little along the highway and then down a gravel side road to where a trickling stream flowed near some houses. The rough track seemed to head over a crest toward the tiny town of Summer Haven, but it was so steep that I declined to keep riding as I did not want to have to ride back over the top or take a ride of unknown length on the paved highway to get back to my car.

I was impressed with Mount Lemmon, and if I lived in Tucson, I would probably be up there many weekends during the hot part of the year. Mount Lemmon actually has a ski area, but it seems inferior to Arizona Snowbowl. It's still amazing it even exists though, providing skiing to the people of southern Arizona. Since I spent my childhood in flat Indiana, far from any real mountains, I have never ceased to be amazed by the differences in climate provided by mountains within a short distance.

Posted by Allen Pogue at 4:51 PM No comments:


I think I have blogged here a couple of times about my lifelong interest in aviation. I particularly like military aircraft because they lead technology in the same way that race cars lead technology for more practical cars. They also have unique niche capabilities compared to civilian aviation, which almost entirely are used for transportation of people or stuff. Military aircraft often do other things that are task oriented and not simply transportation. There is also the dark thrill of warfare.

I've been to a few air and space museums over the years, but for viewing examples of airframes, I've never seen so many types in one place. I actually didn't allow myself enough time to view every aircraft, and forgot to bring a hat, so now I have a sunburn on my scalp (I have a fair complexion and burn easily). Perhaps I'll go back someday and complete the visit. They also offer guided tours of the aircraft "boneyard" during non-pandemic times. The boneyard is where the United States military stores "mothballed" airframes as spares, or for the event of a dire need of more military aircraft, as in a major war. The dry desert of southern Arizona is a nearly perfect place for long term storage of mostly-metal aircraft.

Since my time was slightly limited, I made sure to see the precise airframe examples that interested me most. This basically meant fighter aircraft and bombers. I didn't spend much time on transports and none on helicopters. Since I've been to airshows before, and viewed many static displays, I've seen many of the types elsewhere anyway. Once, a long time ago, I actually rode in a KC-135 air tanker.

Below are some of my favorites from the museum.

Posted by Allen Pogue at 3:56 PM No comments: