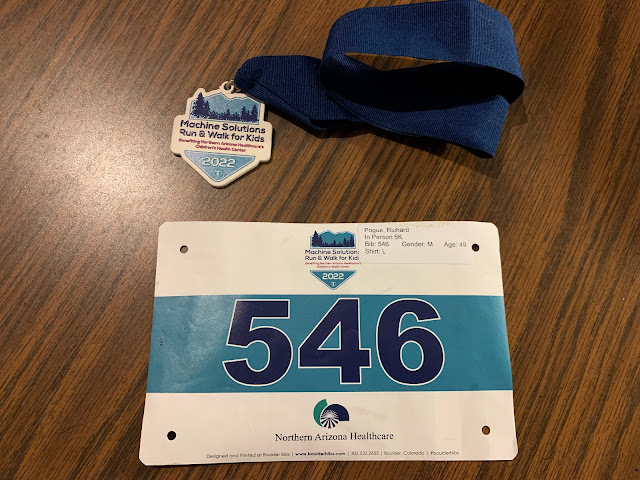 I finished the 5k run on Saturday. It wasn't a great race for me but not as bad as it could have been. I hadn't realized until shortly before the race that it was actually a trail run. After I heard that I knew I would record a slow time. Trail races are more difficult and slower than flat road races. In particular, the route ascended a moderate hill that I am familiar with. I knew it would be difficult to keep running.

When I was in shape back in 2017 and 2018 I probably could have run the entire distance for a respectable time, but reviewing the GPS track from my Garmin watch indicates I walked about 1 km of the 5 km distance. As many have said, trail running always includes walking at some point for everyone. It's just a question of how steep it has to be before you have to walk.

My time was slow but in line with recent training runs with slightly more elevation so I'll take it and hope to be in better shape next year. I'm built more for sprinting than distance. Also, my right "bad" knee hurts. That said, I again enjoyed the positive vibes of the race and saw a handful of people I knew.

I don't think I'll do another race this year and instead just spend the rest of summer and fall enjoying bicycling, hiking, and the occasional casual run. I like fall here in Flagstaff, but dread the reduction in daylight. It's the main thing I don't like about fall and winter. I'm just glad I don't live in Alaska, where the sunlight completely disappears for many weeks.