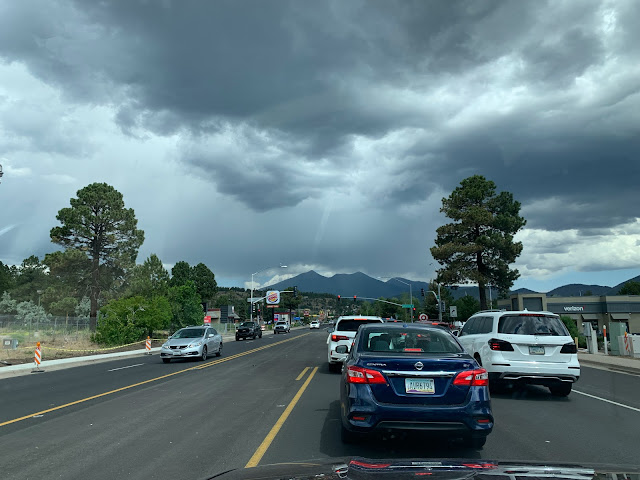 Although there are some reflections on the window, I finally decided that weird sunbeam over the peaks was real. I'm not sure I've ever seen the like. At first I thought it was a tornado. My brain can't make sense of it, even though it more or less aligns with the angle of the sun for the time of day.

We really got a LOT of rain yesterday, enough to cause flooding. Most of it was a result of increased runoff due to wildfires, but a newspaper reporter found the cause of a flooded street to be a clogged drain. The explanation was mundane and a little funny since it was in a recently reconstructed area - meant to improve drainage. "The best laid plans of mice and men . . ."

I follow several professional writers on Twitter. This is a great way to learn, although writers being writers and Twitter being Twitter, it can be difficult to find people to follow that don't lose their minds to the mob mentality and go unhinged for days at a time. We live in an era of irrationality.

Still, I read their analyses of popular stories and try to follow their tips, where appropriate for my fiction. The more I learn, the more I despair of ever writing something satisfactory. I made a tiny amount of forward progress last weekend, sitting in my screen door garage, in between fleeing indoors when the lightning got close and loud. My cats got wild-eyed and jumpy. I'll keep thinking about it and writing when there is something to write.