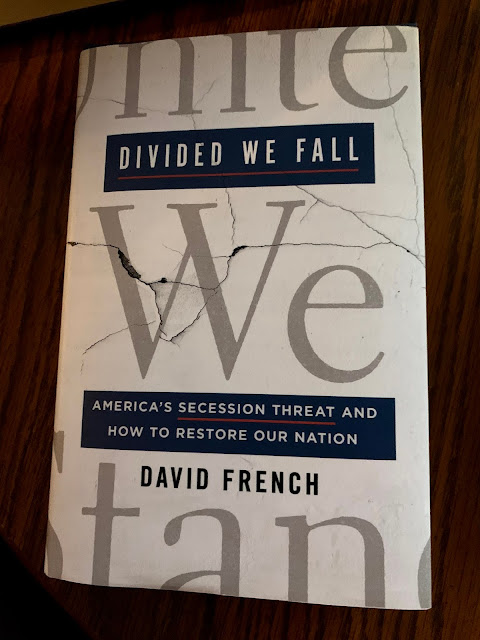 I just finished David French's Divided We Fall, a summary of the current divisions within the political culture of the United States. French is a Harvard educated lawyer who is one of the "Never Trump" Republicans. A conservative, he dislikes the current trend of both parties. Key topics include the Great Sort (citizens relocating to areas with similar politics to their own), and the echo chambers that are created in social media.

French argues for greater pluralism at a time when politically minded people are seeking to dominate opposing groups. Things may moderate with time but there are scenarios where increasingly, tribal groups are concentrated in the same geographical regions, and that could lead to the breakup of the country.

In the end, the author calls for a return to local and state government, which he terms stronger Federalism. He thinks the tribes inhabiting a particular state should be allowed to govern with public policy that suits them, rather than policy imposed by a central government. I think that would work, but I don't think it will happen. Democrats want abortion to be legal everywhere, not just in Democratic states. Republicans want it illegal everywhere, not just in majority Republican states. Both seek to dominate the issue with the power of the Federal government. This pursuit of sweeping central authority is trending completely the opposite of French's proposed Federalism.

Finally he makes a plea to return to religion, as he believes that tribal association has come to replace religion in American life, and that our system can't function without religious morality. French sees everything through the lens of his christian faith.

The book is successful in presenting an alternative to the path the country is going down right now. I recommend it, though it's a very contemporary book, and may not read as well in a few months.