The Granite Dells of Prescott, Arizona


One of the places I have considered living at some point is Prescott, Arizona. It is a mountain bike mecca and has a reputation as an outdoor town with abundant opportunity for exploits in the Bradshaw Mountains and Sierra Prieta with peaks into the 7,000s. Like Flagstaff it sits at high enough elevation to avoid the extreme heat for which Arizona is usually more well known. Unlike Flagstaff the elevation is a more moderate 5300 feet above sea level. This means that the winters are milder. Unfortunately it was apparent that there were few if any jobs for someone with my background. Instead, I ended up in Flagstaff. Anyway, I now live close enough to visit.

I decided to dedicate one of my free weekends to exploring Prescott since it is less than 2 hours from Flag and headed out for some mountain biking at an interesting geological feature called the Granite Dells. It is a stretch of granite rock formations and buttes that stretch for a few miles near town. It is exactly the type of thing that cannot be seen east of the Mississippi River and is extremely photogenic.


I pulled into the city (county?) park at Watson Lake and paid the $2 access fee and received good advice from the attendant on how to get on the trails. The skies were threatening since I had decided to watch the Purdue football game in the morning and the prediction was for afternoon thunderstorms. Fortunately I arrived after most of the lightening had cleared out and never had a problem. The storms were hovering over the Bradshaws all day but broke up when they moved out over the grassy intermountain valley areas.


There are a combination of bike paths, rails-to-trails, and very difficulty technical single track mountain bike trails around the lake and through the Dells. I rode around the end of the lake and into the Dells and soon realized I was in over my head. I kept hoping the trail would smooth out but eventually it became clear that hiking my bike over all the giant slabs of rock was a waste of time so I connected into the rails-to-trails and started spinning. It was hard to keep going because there were so many photo opportunities. It is a scenic place and the rails-to-trails (Peavine Trail) is a great way to see it. 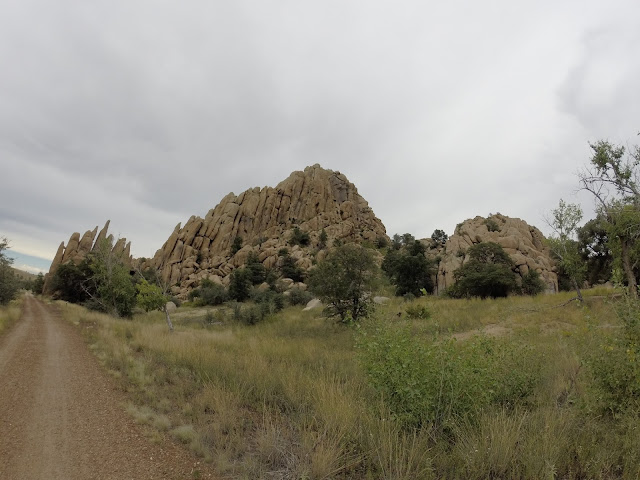 Eventually I rode the Peavine Trail to the intersection with Highway 89A, which also goes through Sedona, and went back and rode a branch line out into classic wide open big sky country as epitomizes the American West. I could see the distant San Francisco Peaks, some 50 miles or more away as the crow flies, sitting atop the Colorado Plateau. I was in disbelief at first that I could see the Peaks but eventually realized that it had to be what I was seeing. The scale of the terrain of this region boggles the mind.


Eventually I realized there was some slight danger of it getting dark on me so I turned back to the car, stopping only to take in some caffeine and enjoy the scenery another time. The park closed at sunset, 6:41 pm on this particular day, and I had been running late all day. I got back in plenty of time to change clothes and head into town to find somewhere to eat.

Prescott has a great downtown, traditional, centered around a courthouse, and is hopping with active businesses. These types of downtowns nearly died in the 1970 and 1980s but thankfully have made a comeback in many places. The local economy is quite obviously dependent on tourist traffic and there are plenty of places to eat all around the square. There was some type of special event going on and it was packed with people, but I found an ostensible "Irish pub" restaurant-bar called Murphy's on the edge of downtown so I had no difficulty finding parking or getting seated. I ordered the Beef Stroganoff, which the waiter claimed drew people all the way from Phoenix. It was a good Stroganoff although I'm not sure I would drive all the way from Phoenix just to eat it. Fortunately there are so many outdoor opportunities around Prescott that there will always be another reason to go back!