One of the more well known mountain bike trails in the Flagstaff area is a segment of the Arizona Trail that runs through meadows on the lower slopes of Humphreys Peak, the highest mountain in Arizona, and along the top edge of Hart Prairie, a grassland in Coconino National Forest. The easy option for mountain biking involves a car shuttle from the Arizona Snowbowl Road to Forest Service Road 418. This allows for a long descent of several miles through fir and spruce forest, high grassy meadows backed by barren snowy peaks, groves of white-barked Quaking Aspen, and finally sunny, open Ponderosa Pine forest.

Unfortunately I had been feeling pretty good about my fitness and made the mistake of trying to ride the overly ambitious loop route defined on the MTB Project web site which involved long riding on a network of forest service roads, fire road, and monstrous climbing. I got it done but not without suffering, missing an extremely easy to miss and unmarked turn, and burning up my legs before I even got to the good part. Fortunately it was nearly all down hill from there, literally, as the Arizona Trail descended steadily over a distance of several miles.

As someone said, nothing truly worth doing is easy, so despite the difficulty, I can't say I regret riding this section. It was worth it for the views alone. The very long and spectacularly scenic downhill at the end added to the pleasure. I decided not to write out a lengthy report for this ride so instead here is a photo trip report. This ranks as a fairly difficult ride by my standards, although I'm not sure I would say "never again." It certainly is one of the most beautiful places I have ridden. 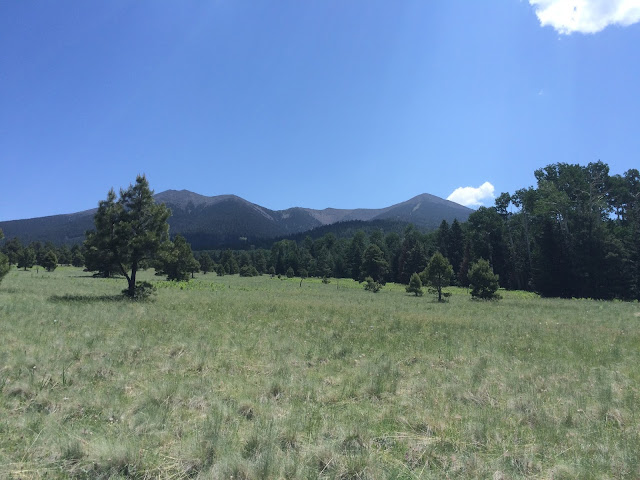